The development of the conference was as much determined by the nature of the U.S. and its population centers as it was by Asbury or other individuals.  Several attempts to  manage the Methodist movement in the U.S. led to our current practices.  The problem was the sheer size of the country. Especially for new arrivals, this was especially hard to grasp.  The challenge was how best to manage the Methodist movement.  Asbury had encouraged itinerancy and this probably worked to keep the movement from fracturing.  Constantly circulating preachers helped tie the movement together.    But how were decisions to be made and imparted to others?

In England this had not been a problem.  The country was compact enough that Wesley could bring all, or almost all, of his preachers together for an annual conference.   And it was one where Wesley did most of the talking and all of the decision-making.  Even before the American Revolution it was becoming apparent that this model would not work. And after independence and the explosive growth of the new church it was obvious that a new approach was needed.

The problem was two-fold.  First the size of the country, just along the Atlantic seaboard, worked against the idea of a single conference meeting yearly.  The distances where just too great.  Once the Ohio valley and the lower Mississippi area were opened for settlement then such a concept was impossible.

The second challenge was the expectation of some level of participation in governance by the preachers.  The U.S. was still a very hierarchical society.  Even though the revolution had been about self-governance, it was still governance by a broadly determined elite.   And yet, there was the expectation of participation in leadership  and the desire for some ownership of the movement.  In that sense American Methodism was no different from other groups and movements within the new nation.    The decisions that Asbury made over the coming years, as well as others, reflects this tension.

From the pure Wesleyan concept of an annual meeting of the preachers, there was a quick shift to multiple conferences.  These were not geographic ( diocesan) in nature, but practical - a very Methodist attitude - in that the meeting called together preachers from a given area to meet.  At these meetings they sang, they worshiped, they reported on their work and they received assignments for the next year.  All of this was similar to the experience of Wesley which shows the influence of Asbury.    In many respects the meetings were ad hoc.  Asbury would declare a particular location for the meeting (sometimes as much as a year in advance)  and those in the area would come.  Many locations had a meeting year after year; others did not.  So it was possible for a preacher to attend a meeting in one year and the following year be with a different set of preachers than the previous year.    At some level it may have been hard to develop an espirit de corps for these pastors if they seldom associated with the same set from year to year.  Even harder was the decision-making process.  All conferences were equal, which meant if there was to be a polity change it had to be voted on at 6 or 7 conference meetings each year.  If the recommendation was altered, or others amended it, then those had to circle around back through the meetings again.  In short decision-making was fractured by space and time.  Instead of one yearly meeting were decisions were made, it was more like a year-long meeting discussion.  For Asbury, and for others, it was frustrating.

The annual conference focused on a geographic region and the preachers joined a conference which gave them a consistent group of colleagues.  It was able to focus on an area and with the 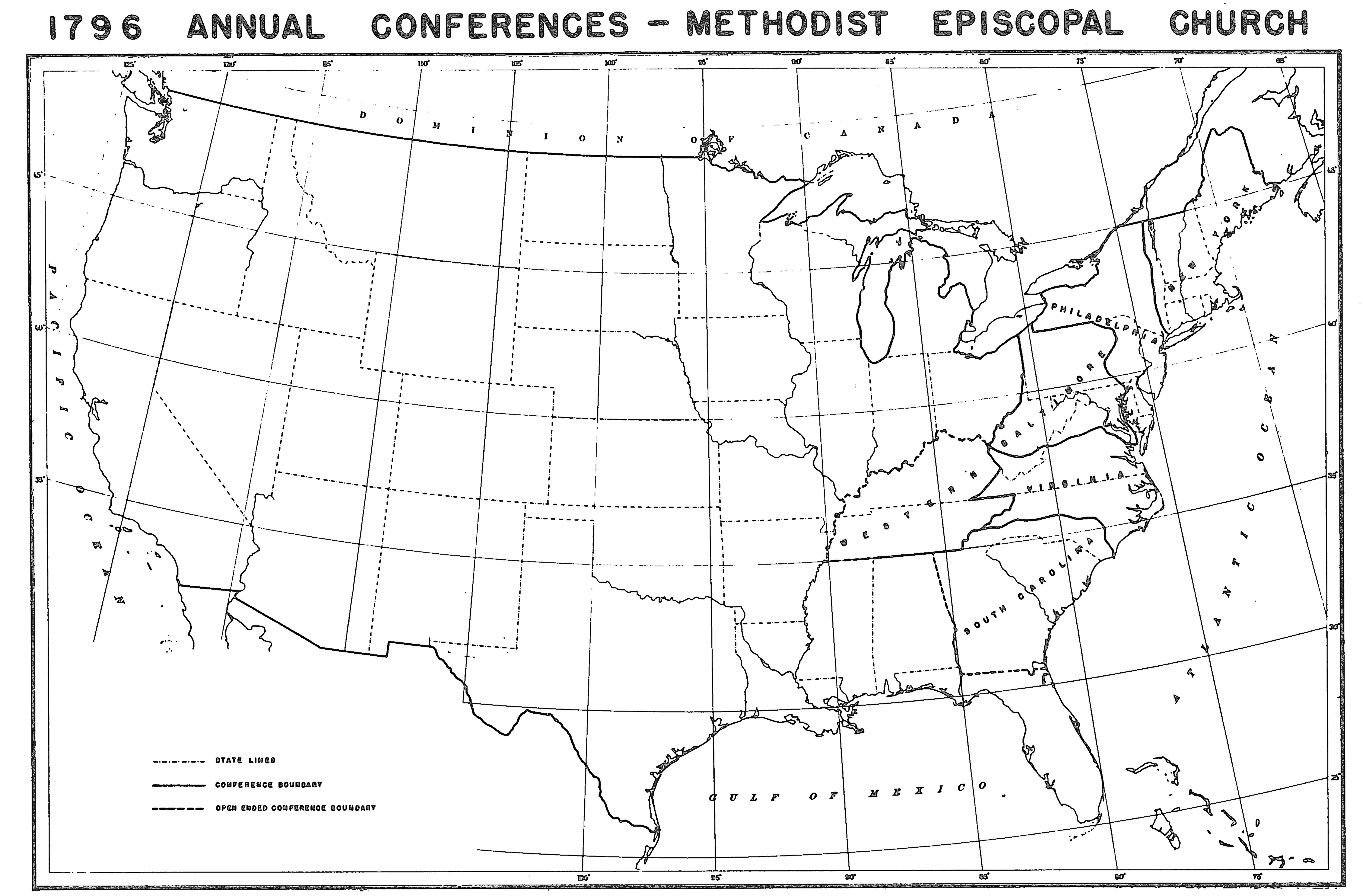 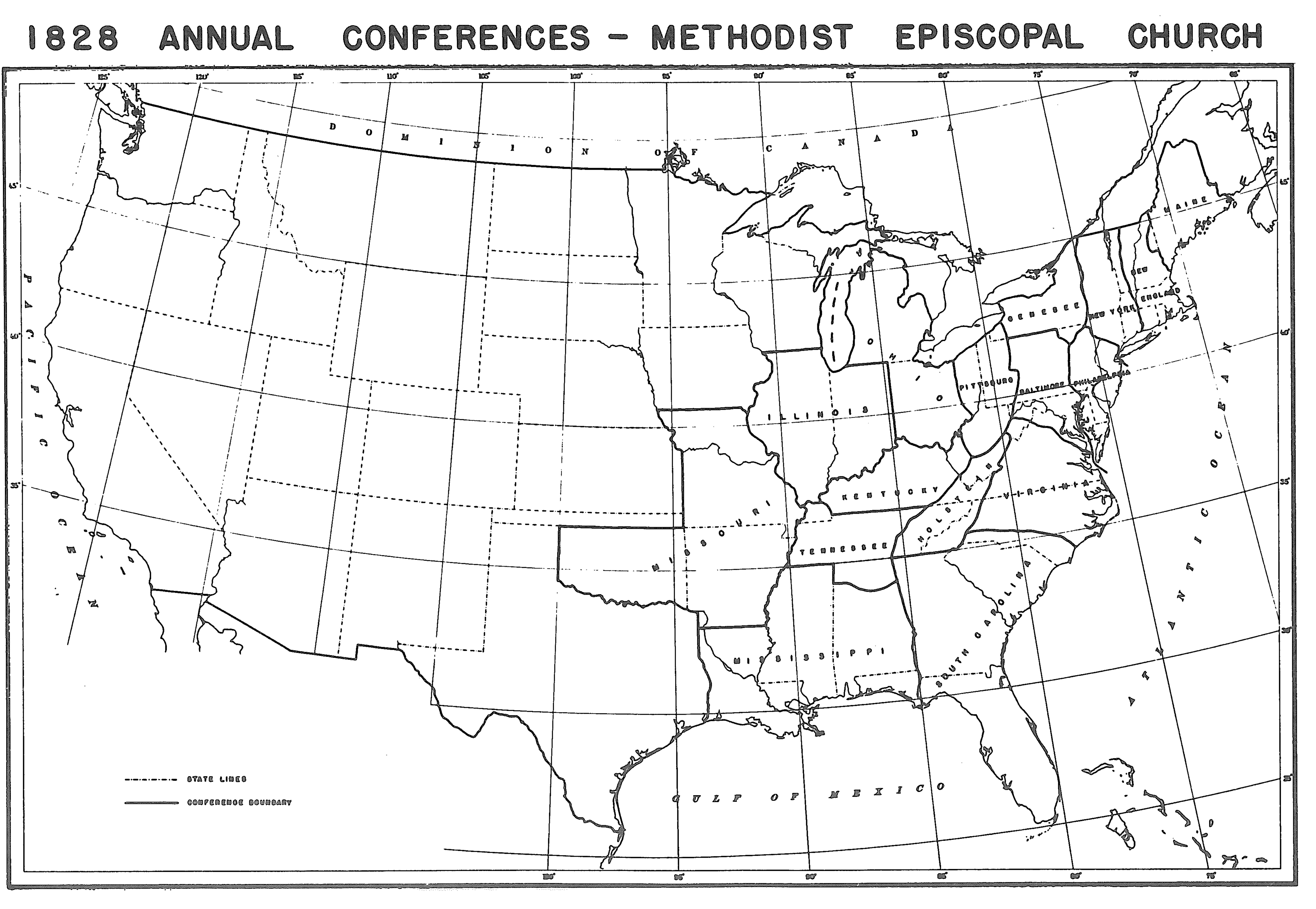 to start new conferences.  The regional conference allowed issues of appointment, appeals and day-to-day matters stay at the local level.  It began to separate the conversation.  The annual conference as a fixed geographic area was firmly established in 1796.

Along with the annual, or regional, conference came the general conference which was supposed to deal with general policy and guidelines for the entire denomination.  The first General Conference met in 1792 and the plan was to meet once every four years.  At this point all the preachers were members and expected to attend.    In 1808, the General Conference became a representative, delegated, body.  There were just too many preachers and the distances too great to have of the preachers gather in one place for what was becoming a month-long meeting.    From its creation the General Conference was in tension with the  episcopacy.     There were those who saw the Conference as the source of authority and leadership in the church, while there were others who claimed the same for the bishops.