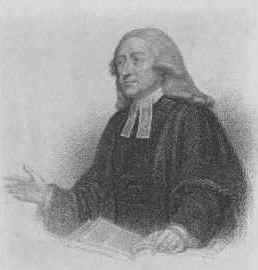 English evangelical preacher, founder of Methodism, born in Epworth, Lincolnshire.  He was ordained a deacon in the Church of England in 1725, elected a fellow of Lincoln College, Oxford, in 1726, and ordained a priest in 1728.  At Oxford he took the lead (1729) in a group of students that included his younger brother, Charles Wesley, and George Whitefield.  They were called Methodists for their methodical devotion to study and religious duties.  In 1735, John Wesley accompanied James Oglethorpe to Georgia to serve as a missionary.   In 1738 at a meeting of a small religious society in London, Wesley experienced conversion while listening to a reading of Luther's preface to the Epistle to the Romans.  This experience of salvation through Christ alone was the burden of hismessage for the rest of his life.  He soon entered upon evangelistic work, in the course of which he is said to have preached 40,000 sermons and to have traveled 250,000 miles.  Wesley undertook open-air or field preaching, first in Bristol, then elsewhere.

In 1739  a group in London requested him to aid them in forming a society and to act as their leader.  An old foundry at Moorfields was purchased; it remained until 1778 the center of Methodist work in London.  In 1784 Wesley executed the deed of declaration by which the Methodist societies became legally constituted and which was in essence the charter of British Methodists.  In the same year he became convinced that he must ordain clergy to serve the Methodist societies in America, although he had long hesitated to assume the authority of ordination.  Wesley ordained two preachers as pastors and Dr. Thomas Coke as Bishop.  Francis Asbury was to serve as co-Bishop in the newly-planned church.