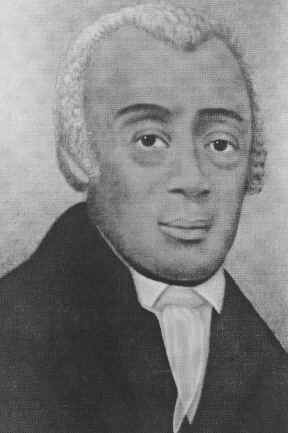 The founder of the African Methodist Episcopal Church was born a slave in Philadelphia.  After purchasing his own freedom as a young man, he joined St. George's Methodist Church, from which in 1787 he led a dramatic withdrawal of black members.  Allen soon became pastor of the group and was ordained as a deacon by Bishop Asbury.  When the African Methodist Episcopal Church was organized nationally in 1816, Allen was consecrated its first Bishop.

A leader of the free black community in Philadelphia, Allen also served as one of  the spokesmen for the forces opposed to the American Colonization Society, an organization that proposed sending freedmen back to Africa.  His campaign against the colonizationists resulted in the first meeting of the National Negro Convention Movement in 1830 -- a loosely organized group that functioned as a public platform for black abolitionists and community leaders.