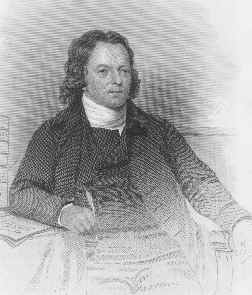 English clergyman and with Francis Asbury, first Bishop of the Methodist Episcopal church in America.

Though remembered primarily as the "Father of Methodist Missions," he was a key figure in the development of Methodism on both sides of the Atlantic in the years before and after Wesley's death.  An Oxford trained lawyer turned priest, he openly allied himself with the Methodists in England.  As Wesley's right hand man he became President of the Methodist Church in Ireland in 1782, and two years later was appointed "Bishop" for America.  As Asbury's uneasily yoked colleague, Coke visited America nine times, the last time in 1803.

Always deeply interested in missionary work at home and abroad, he traveled widely to establish Methodism in the West Indies.  Hoping to open Methodist missions in the East Indies, in 1814 he set sail for Ceylon, but died on the way.

In addition to being a popular preacher, he was an author of some considerable importance.  His writings included a multi-volume commentary on the Bible and a history of the West Indies.